It is hard to believe a week ago we were at the lake visiting with the Spoolman family. A week before that we were in Hayward with the Seehuetter gang. What fun we had the 15 days we were gone. It was a whirlwind vacation.

We left August 14th, trailering our RZR (side-by-side)  and went to Terry’s for a few nights. Celebrated our 48th Anniversary with Terry and George. I had wonderful deep fried walleye. It was to die for! Nothing like WI fish fry! I think Rick had the same thing.

Terry and I had a couple hours of antiquing. Saw this cool cone threader, which could easily be made with wood (hint: Corey) to use with those cones of yarn!

That Friday we went to Tim’s house. He had taken off work and we were to go riding on some of the trails that weekend through Tuesday. Friday, Tim, Rick and I went to Seeley to the Sawmill Restaurant and Bar. It was cool riding, though. Trails are less rocky. 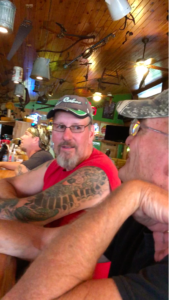 Saturday, Rick and I went riding ourselves and managed to find trails that led into Hayward. It’s not like Black Hills Trail rides. It was very confusing to us as you cannot ride on some of the main highways. (Although, some things are changing monthly there.) Each township decides whether you can ride in their town, and where. At least they have wonderful trail markers!

As we meandered around the trails we stopped at a cool stream called Mosquito Brook.  As I turned around to get back in the razor, there sat a dragonfly sunning himself on the back of the RZR.

Most trails are just like what you see in the pictures below. What we would call “roads” and wooded trails. This would be beautiful in the fall! 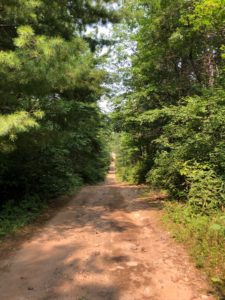 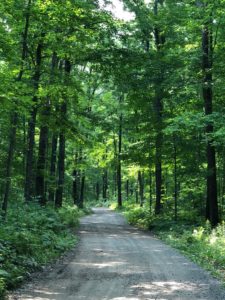 Sunday Sheila had off so we all took off late morning to do some trail riding.

My brother has a phobia about stacked rocks. He is a logger and whenever he sees rocks stacked, he tips them over. He says they get in his way when logging. Tim and Sheila were ahead of us and we happened to see this huge pile of rocks stacked up. Rick stops and gets out to add a couple more to it.  Paybacks are wonderful. (Majority of pictures are seen as a slideshow. The lake picture below had to be inserted separately as it wouldn’t fit in the “gallery” of pictures.)

Everywhere we looked there were bumblebees sucking on the wildflowers. They could have cared less if I was there. Even some of the tree leaves had turned color and fell to the road. Not many, but there were a few!

After stopping at a country bar for lunch, we went on to this inn overlooking Garden Lake. They had all sorts of wood carvings of bear, eagle, owls, chipmunks, etc. One bench in particular caught my eye. It had a bear at one end, and little cubs, with Mama Bear at the other end. There were also some really unique cottages and office places.

Monday Tim took us on a trip up near Gordon, WI and into Ashland County. He neglected to tell us how muddy it was. We didn’t get stuck, but Tim did. I think we went over at least 10 bridges in our travels. Some were pretty rickety, too.

Toward the end of the day, Tim took us to another “town” called Cayuga, but this turned out to be 45 minutes away. A nice cold drink of water was needed, although all the guys wanted was a cold beer. I suppose we drove for 25 miles or more (dust never dissipating at all as you can see by my face and Rick’s). At last we are in Cayuga only to find out the stupid place was closed. For all we know, it is closed forever, although the sign says it is open Thursday – Sunday. Tim knew some people who had rented rooms in the lodge last year. Interesting ghost town. No one was around, and the two houses we saw looked deserted.

Then we headed home for dinner of fish, green bean casserole, and sweet corn. Prior to dinner there was a makeup party for the guys, thanks to Tim and Sheila’s granddaughters. Tim got his toenails painted blue (I tried to say they were Rick’s again when I put it on Facebook) and Rick had make up put on in the form of a mustache. (By Sheila non-the-less!) I told him I wouldn’t put the picture on Facebook. Here is Iana painting her grandpa’s toenails.

The she put make up on her sister. 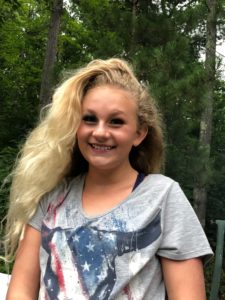 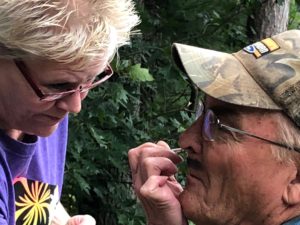 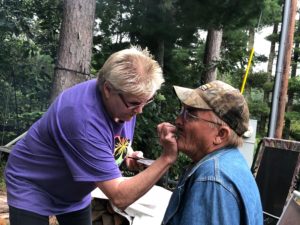 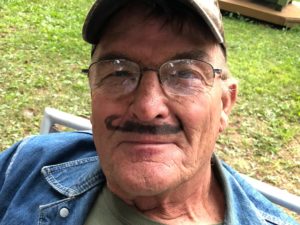 I didn’t say anything about not putting the picture on our family site.

After dinner, before the fire, we sat around and watched Sturgis chase his tail.

Tuesday we went to the Sawtooth Restaurant and Bar in Seely to have breakfast. Sturgis came along for the ride. Not only that, Tim let him out of the Ranger and he took off running ahead of Tim. We couldn’t keep up so it is difficult to see Stugis ahead of the Ranger. He also loved going into Mosquito Brook and chasing a stick when Tim threw it.

After breakfast at the Sawtooth we walked next door to where the guy makes the benches I love! I can see one sitting back near the flower garden, replacing the other one. Yep!

That was about the extent of our ride that day. Rick and I had to go back to Tim and Sheila’s and wash clothes and get things packed to head for the lake.