In Memory of Cedric Spoolman

It was June 3, 2002 when little Frankie heard four little kittens crying under the porch of his house. He crawled under and got them out with the help of his Mom, Juanita. The mother had been killed so Juanita knew she had to feed them. Juanita took them to work with her, bringing in baby formula and eye droppers. I happened to be working at the warehouse that day, cloning Mac computers. Barb was helping. The first night Barb took the four kittens home. The following morning Juanita brought in another pure white female kitten, larger than the other four tan/red kittens. I fell in love with the white kitten and said I’d take her. That night I took all five of them home with me, knowing Rick was going to be late working on a large project with our son, Corey. Oh well, as they say today… It is what it is.

I would get up every 2 hours or so to feed the kittens. We had them in a large rubbermaid tub with a Tye stuffed Westie dog (for the kittens to snuggle up to) and a manual wind-up clock to replicate the mother’s heartbeat. I washed towels three times a day. Every morning I’d take them to work and put them in a closet. On our break, everyone took a kitten and doll baby bottle and fed them. When it came to potty training, Cedric was the first to go by himself! We found out that by rubbing their little bottoms with a cotton ball, this stimulated them and the cotton ball resembled the mother’s tongue. It was an interesting time of being a mother to four little kittens.

On the third day I took them to see the Veterinarian. He thought they were about 9 days old. That would put their birthday on May 27, 2002. The Vet listened to their lungs and heart and checked them all over. After looking at Sir Richard, he said he had a bad heart murmur and needed to be put down. I cried my heart out and told him “No!” There had to be something he could do! I took them home praying a miracle would happen and Sir Richard would be all right.

That night Angel died. She had been the largest of all the kittens and she seemed healthy and the vet said she was fine, but sometimes these things happen without any reason. We often wondered if the Mom had originally pushed aside that kitten because she knew she would not live so she was not among the litter when first found.

With Angel gone, I said I would take Cassie. Barb had dibs on Sir William and Joe, our boss, wanted Red. No one wanted Sir Richard because he was so sick. I convinced Rick that we could keep both kittens. After all, Sir Richard would not be around for long. Little did we realize that Cedric would live many years and teach us to never give up.

Eventually we renamed Sir Richard, Cedric (thanks Gary S.) and we also found out that Cassie was not a female, but a male, so we named him Casey. Every three weeks or so I had to take Cedric in to have the vet stick a long needle in the side of him and drain fluid from his lungs. Each time we brought him in, they suggested it would be best if we put him down. After the fourth visit, the veterinarian must have been tired of me crying as he never brought it up again.  🙂

It was almost as if Cedric knew he could not do the things his brother, Casey, did. He slept the majority of the time, but never turned down playing with a dead mouse whenever Casey brought one home. He would NEVER eat it, but he didn’t mind playing with it. It seemed as if Cedric was always at the vets. At 7 weeks old he had his first surgery. He and Casey had gone under the deck playing and Cedric cut his eyelid on a rusted nail from old barn wood. That required several stitches. Cedric could not have anesthetic, but the vet gave him laughing gas to put him under for a few minutes while he stitched it up.

At one year old he ripped open his stomach (he had a herniated belly button) by trying to get away from another cat and he jumped over a wooden fence that was pointed at the top. That was a three – four hour surgery, and the on-call vet told us she may not be able to save him. It was another miracle a veterinarian performed.

Cedric was a mischievous cat. Whenever we left home, he’d open cupboards, drawers, get up on the toilet seat and paw at the toilet paper until it was laying all over the floor. The mess we found each time we came home from vacation was unbelievable.

At one time his breathing became so bad we had to take him to Sturgis for an ultra-sound. Cedric loved to purr. The vet had a difficult time hearing his heartbeat as he continually purred. They thought running water would help, but all Cedric wanted to do was lick the water as it streamed from the faucet.

He was quite the character. He had a routine every night. He would sit at the door of our bedroom, waiting for Rick to give him his meds. His arthritis became so bad he had a difficult time walking, or climbing up on things. He usually waited for us to pick him up. His strength was in his front legs as when he had to get up on something himself, he clawed and climbed his way. Then in early 2015 it seemed as if he was having a seizure. He couldn’t get up, and just laid on his side trying to drag himself along. That is when he was diagnosed with hip dysplasia. The vet had never seen anything like that in a cat, it was so bad. He was put on meds that we could only give him for three days. After that, we were told we could give it to him if we understood there might be repercussions. We didn’t care, for his comfort we gave him a pill every other day. One thing we did notice was that whenever he tried to wash his face, he couldn’t keep his balance.

Each time he had an “episode”, he would come out of it within 10 or 15 minutes. But, the past couple of months we also knew the time was near. This past Tuesday, June 7, 2016 (14 wonderful years later) I awoke to Cedric lying next to me struggling to crawl on his side. He never quite came out of it and would stagger and fall after a couple of steps. Rick called the vet and we had an appointment to put him down at 10:30. Those three hours seemed like forever. When we got there they put an IV port in him before bringing him to us wrapped in a blanket, and while I held him they put him to sleep.

Cedric will be forever in our hearts. Rick and I cried tears of sadness, but when we thought of all the wonderful years he gave us, they were tears of wonder and joy also. He fooled the doctors and outlived his life by 14 years. Cedric was truly a blessing to many. His true testimony to all was to never give up! I think it is a lesson we can all learn.

Many at Douglas will remember him as the first “pretend-student” in Campus, one who had many parents, or part of many households, one who had his own lunch account, and he was the first student who had his report card printed out in Campus, among other things. (That was before elementary teachers used the report card template.) What a fun time we had with that! Cedric will be remembered for many, many things.

We love you Cedric! 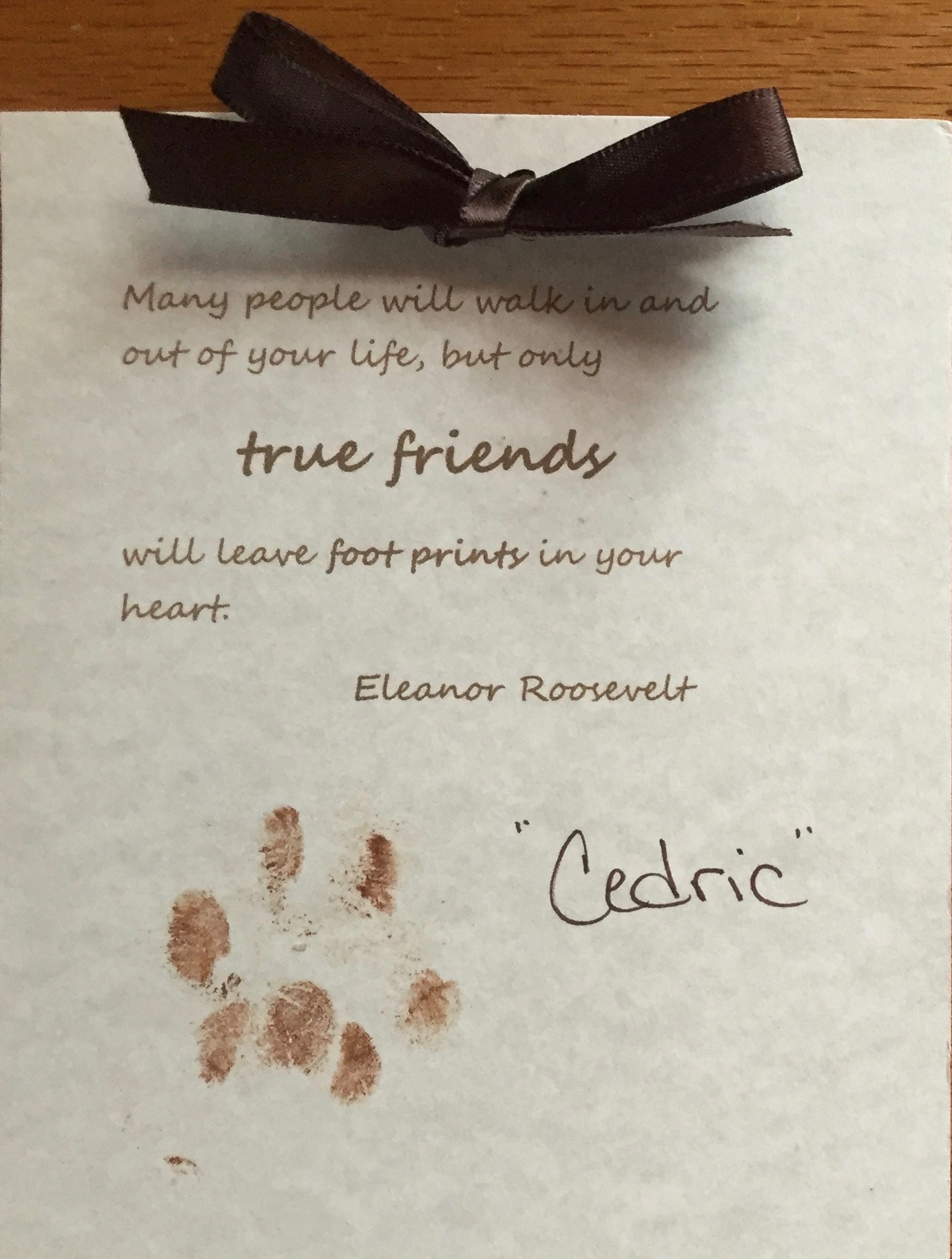