When Casey came in after a long day outdoors, she’d run to him and start smelling his 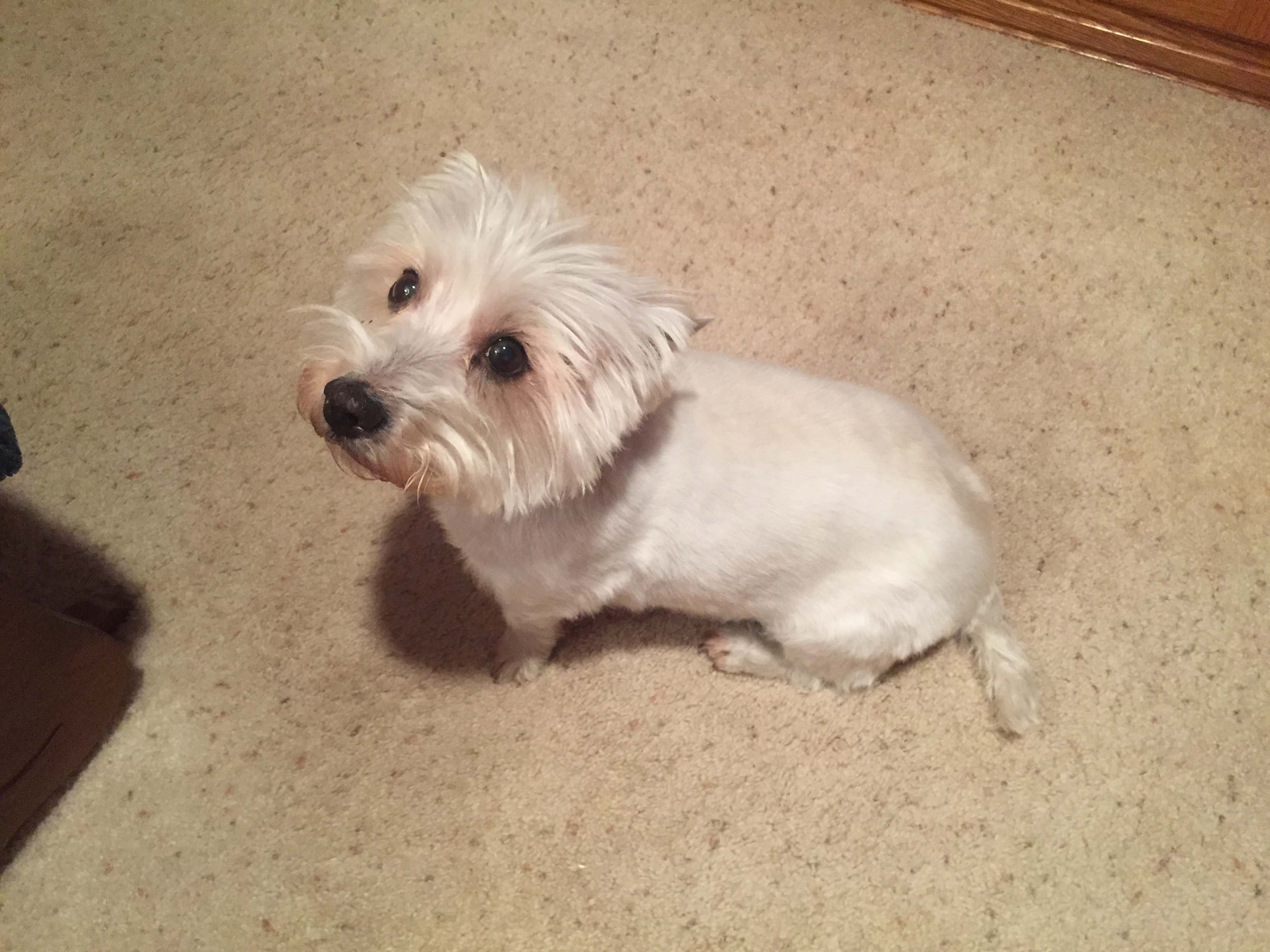 mouth. Casey just stood there and let her. We soon learned that whenever he brought a mouse home to play with, all we had to do was tell Cassie to go get it. West Highland Terriers were raised for catching mice and rats, I guess. As for Katie, she would sit off to the side and watch what was going on.

Katie and Cassie got along so well. As the years passed they were inseparable. Katie would always wait to see what Cassie would do when they went outside, and then she would follow. The neighbor girls, and their friends, would come over and take the two for a walk. One day, the walk was a little too much for Katie, and she had to quit going for 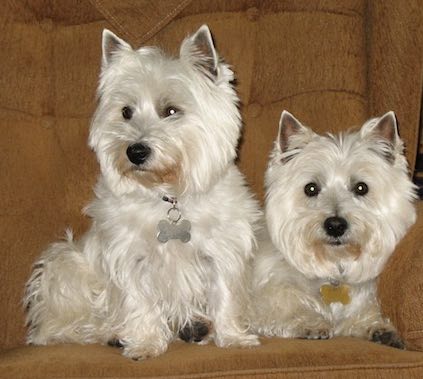 her long walks. Whenever you mentioned the word “walk” to Cassie, she started her high-pitched barking. She had that word down pat. Another word she knew was “treat.” What dog, or cat, doesn’t know that word? Katie is on the left and Cassie is on the right.

Meanwhile, December 3, 2010 Casey went missing. After one week, we thought he was dead. We had had a snow storm and temperatures dropped way below 0º. (Truthfully, I didn’t feel he was dead, but one could not convince Rick of that.) It was a sad time not knowing what had happened to him. It is funny how the other pets knew that something was amiss and, in their own way, they tried to comfort each other and us as their “parents.” After 10 days, we put out fliers, and the next day a neighbor called Rick to say he saw a cat up in the rafters of his shed, but he wouldn’t come down. Rick ran over there, got a ladder and sure enough, Casey was peeking through a hole in the rafters. How he jumped 10 feet is beyond us. We knew there were mountain lions seen around our neighborhood, so we deduced that he could have been scared and literally scaled the wall. There was no other way up to the rafters. He came home 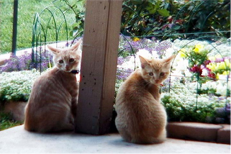 December 14, 2010. He was skinny and needed lots of loving. Rick called me at work to tell me he found Casey. I cried and cried. On my way home, I went to the store and bought him shrimp (his favorite). He was going to dine well that night!

Another favorite pastime of the “boys” was sitting near the flower garden, watching the birds as they splashed around in the bird bath. My friend, Kathy, is painting a picture of the two boys sitting near the garden looking up at the birds. 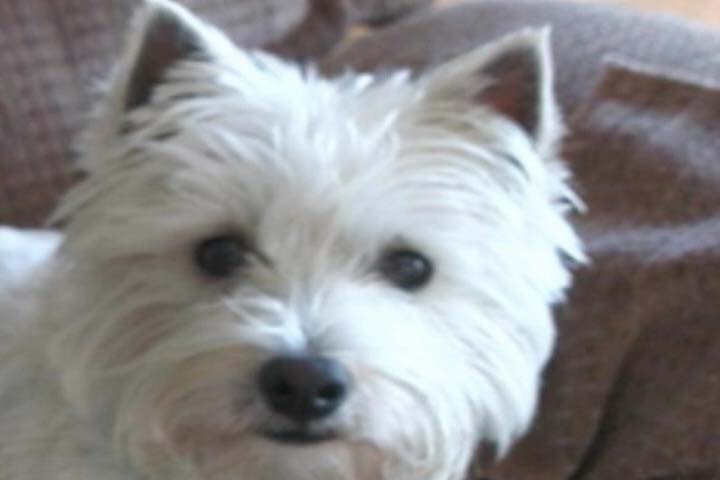 In 2011, Katie had some issues, and it turned out; she had a tumor (non-cancer) at the base of her neck. I believe the shots her vet gave her reversed something that was going on, which turned it into Cushing disease. I don’t recall all the details, but there was nothing her vet could do except give her these shots once a month. After three months of going to the vet for the shots, we knew it was time to let her go. Her quality of life was deteriorating each day. Katie died February 20, 2012.

Now it was Cassie’s turn to mourn her sister. Her best friend was gone. Cedric and Casey 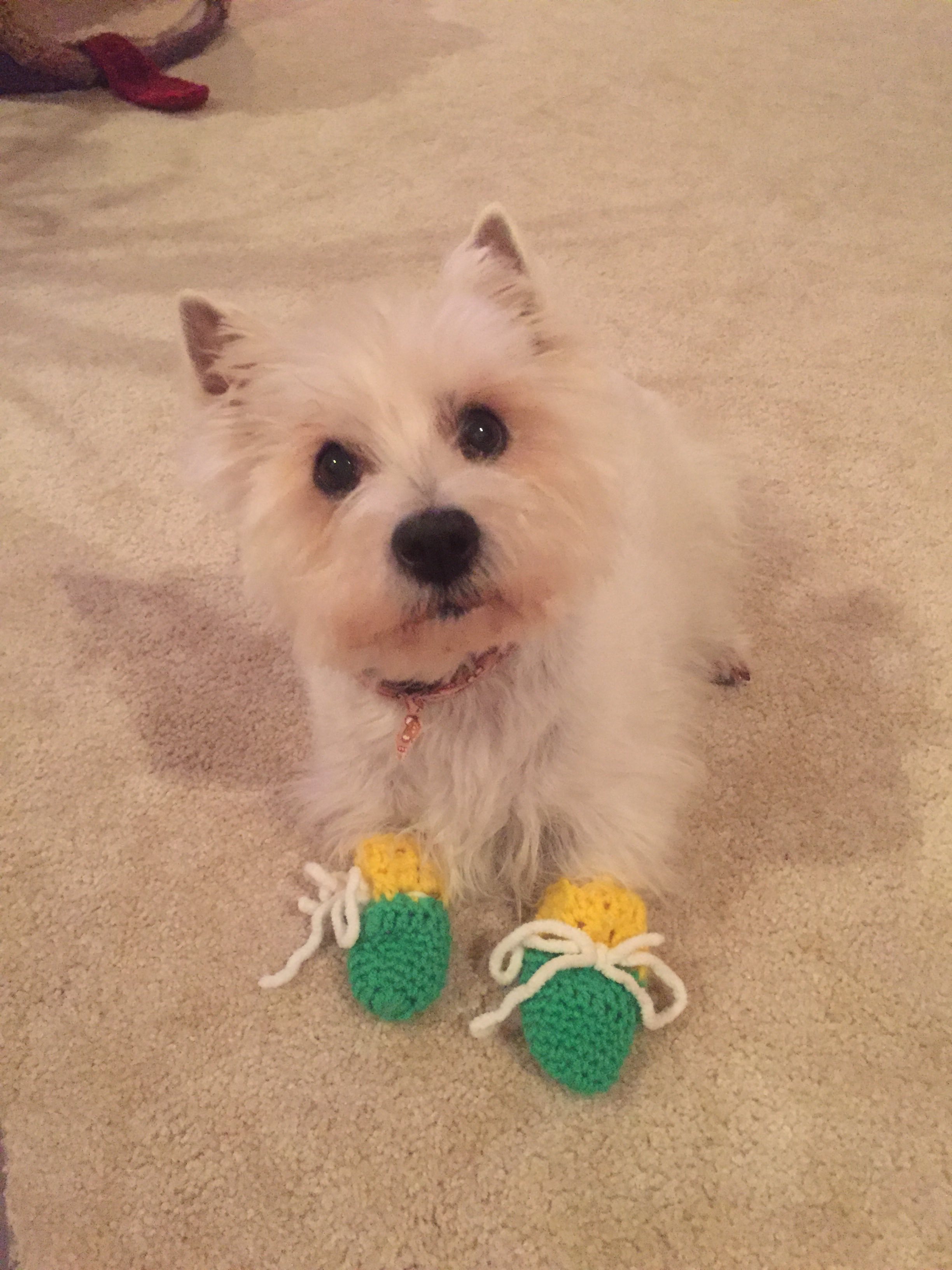 could have cared less. They continued to go about their own business. At first, Cassie would sniff all over the place looking for Katie. As time went on she soon forgot.  She was content by herself. We were not getting another dog!

Time goes by so fast… it was now 2016. Cedric had a few “spells” or seizures, but he’d come out of them. His vet put him on different pills, and we continued to give him the pills, even though he was not supposed to have them more than three days. We signed a form saying we understood this. On June 5, 2016, Ceddie had a bad episode. He could not walk without falling down, and when he finally did get up, he walked as if he were drunk. I put him in his bed, and he curled up as if to say, “I’m ready, Mom.” 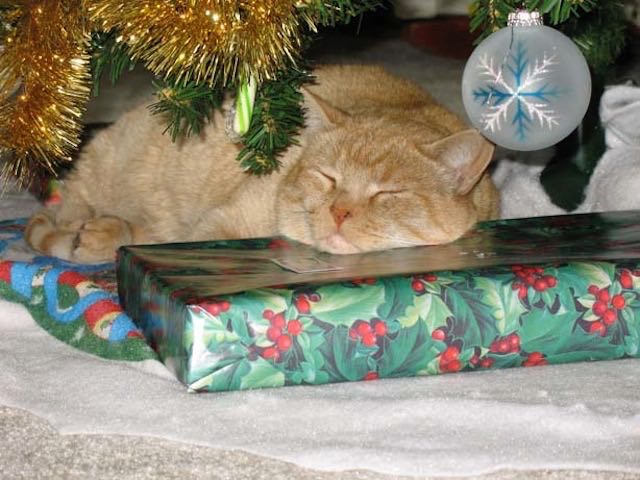 We called the Mountain View Animal Clinic and made an appointment to put him “over the rainbow” at 10:30 that morning. How many times has our heart been broken? He was such a special cat. All our pets were, but there was something so different about our little Ceddie. Here was a cat who was not supposed to live more than a few weeks, just because of his bad heart murmur, and he lived all of 14 years. What an amazing cat! As you can see in the picture above, Christmas was his favorite time of year. He was under that tree the minute Rick started putting it up. He would play with the garland, bat the Christmas decoration balls around, or lay under it. We celebrated Christmas with our pet “kids” every year. They had presents, and oftentimes we would get up in the morning and some gifts were already opened.