So, now the Spoolman Pet Haven is down to three pets. Casey, Cassie and Mittens. Life goes on.

The following summer, July 2017, we noticed Casey was beginning to slow down. He was our adventurous cat, always chasing rabbits, baby turkeys, mice or whatever he could find. There was one time the little stinker took a baby turkey to a neighbor. He growled at the young boy when he tried to get it from him. The Mom picked Casey up and took him to the pound, then called us. I don’t think he ever went there again. He would visit other friends along King’s Rd. Charles and Alice looked for him almost every day. He loved going to their house.

On Saturday, July 15, 2017, I came home from selling coffee at the Farmer’s Market, and Casey was still lying underneath the deck. He had been in the same place since the night before. Corey and I quickly unpacked the car, and I called the emergency animal hospital. Corey removed the fencing from around the deck to bring Casey out. We ran him across town and had to leave him at the hospital. They had more tests to run. 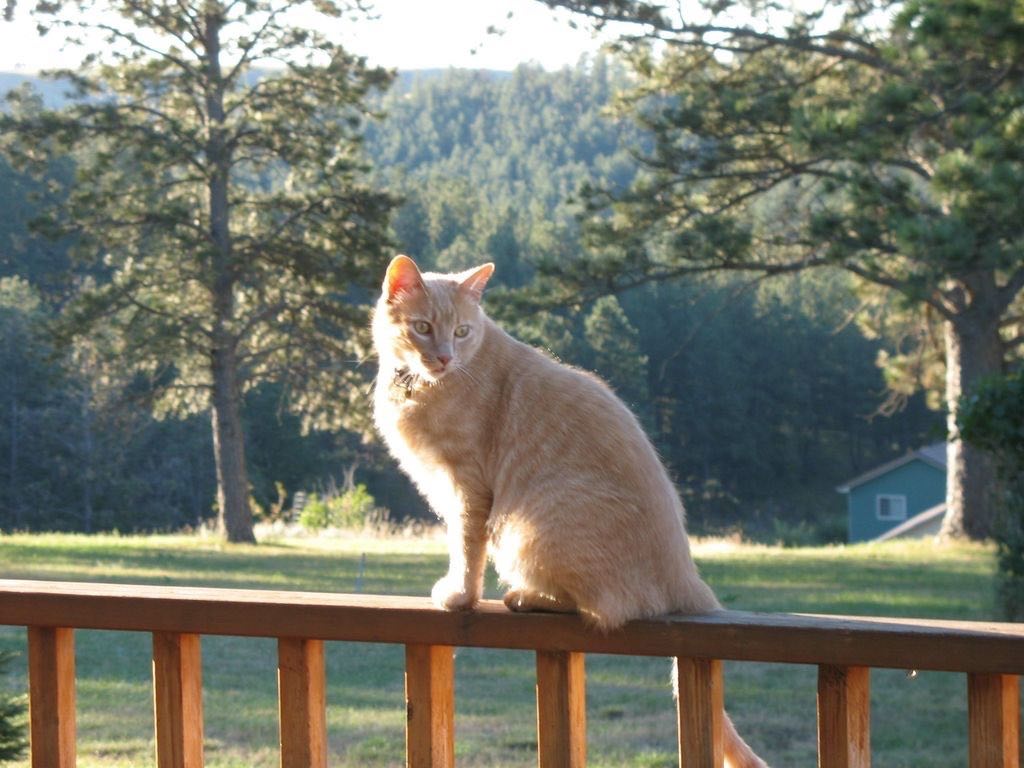 The next day they called to say he had perked up after giving him some fluid, and he had eaten a bit, and we could come and get him. The vet said there looked to be fluid around his lungs, but he couldn’t pinpoint what it was. They would have someone else look at the x-rays, or they could send it to our vet and have them look tomorrow. We chose our vet. We brought him home and laid him on the floor in our living room.

Monday, July 17th, Casey had not moved since we brought him home the day before. He was having difficulty breathing. We called the vet at Mountain View Animal Clinic and ran him down there. By the time we got there, 10 minutes away, he was gasping for breath. They had to put him in an oxygen cage to help him breathe.

We left and came home. A few hours later, they said he needed to have an ultrasound and fluid drawn from his chest as he had a collapsed lung. At that time, they didn’t say what they suspected.  When we picked him up, and they took him out of the oxygen cage, he was gasping for breath. We had to drive across town to the emergency hospital again for the ultrasound. I drove, and Rick held Casey in his lap. I didn’t think we would make it. It was horrible watching him try to breathe. He hated riding in cars anyway, so that didn’t help matters any.

When we arrived they immediately put Casey in an oxygen cage and waited for him to settle down a bit before doing the ultrasound and drawing fluid from outside the lung. It was as they thought. It was a rare disease and one that the cat has to have the gene to get it.

There is a wet disease, and a dry one. Casey had the wet FIP. Feline Infectious Peritonitis. There is no cure. July 17, 2017 Casey went to be with his brother, Cedric, in cat heaven. 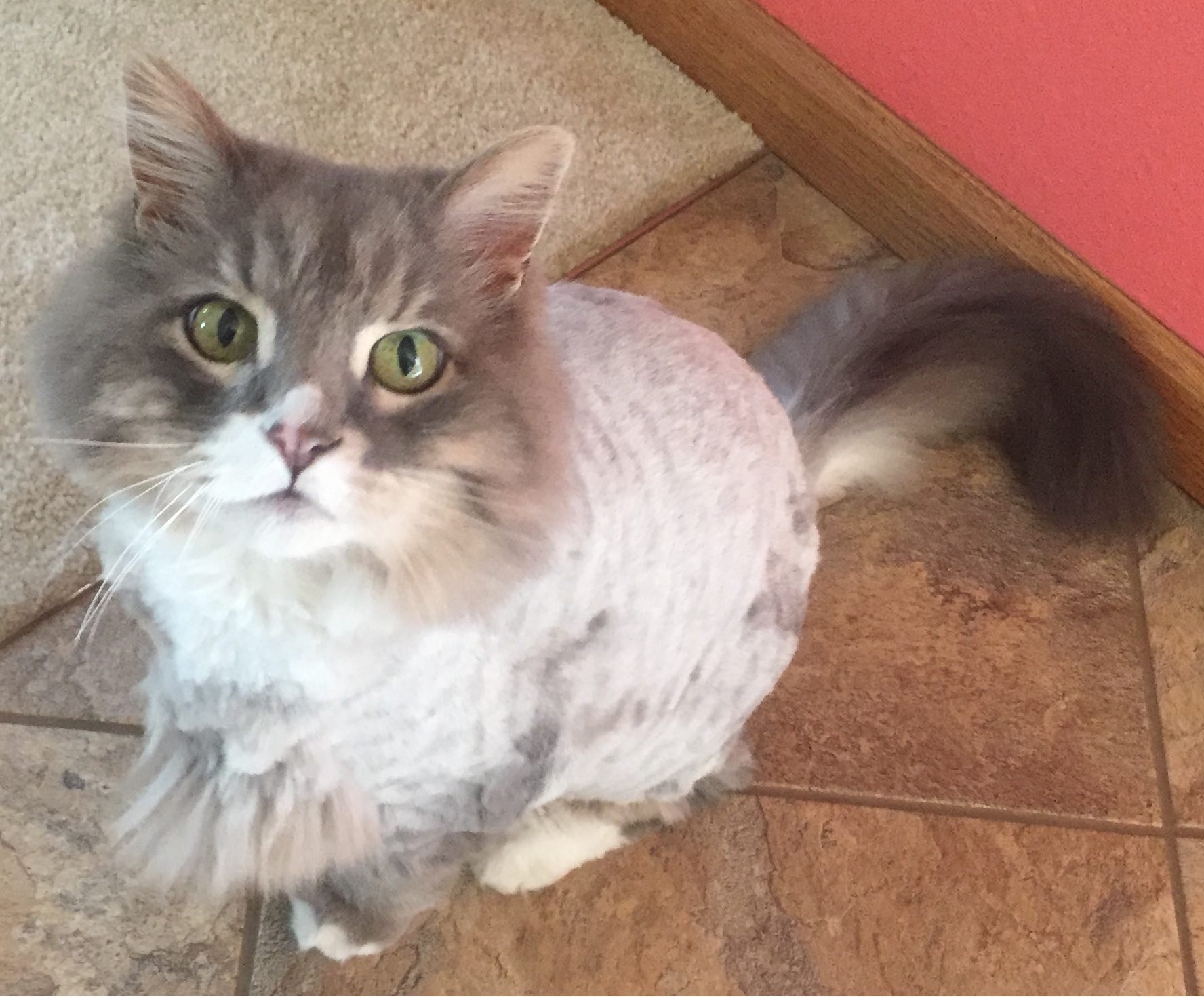 After Casey died, our little Pet Haven was down to Cassie and Mittens. Of course, we knew Cassie already had bladder cancer and suspected she wasn’t too long for the world. As I mentioned at the beginning, her vet was surprised two years had already passed since he diagnosed her.

The following movie was Cassie’s favorite thing to do when she was outdoors with Rick.

That is not the end of the story of the “Spoolman Pet Haven”… After 51 years of marriage, we have never been without a pet for any length of time. I try to put on a good front, but it hurts to lose them. I try to stop the tears, but sometimes it is impossible. Eventually, enough time will pass, the memories and hurt of losing them will pass, but I will forever be thinking I see one of them out of the corner of my eye; knowing it is impossible. There is nothing in this world, except God, who loves so unconditionally as a pet does. Their joy and love, whenever we came home from work or town, was there for all to see. God put them on this earth for a reason, and I wish everyone could experience the unconditional love of a pet. The companionship and love they gave us, is far beyond anything else on this earth.

Mittens was our last pet to live here. He was more or less Rick’s cat as he would come in the sunroom to sit on Rick’s lap whenever he sat down. Sadly, the end of September 2021 we noticed he was not eating or finishing his R/D diet food. He had been 18 lbs and was put on a diet. He was a beautiful cat, with exceptional bright eyes, and a gorgeous long gray-haired Angora cat. He never liked people around and would run whenever the doorbell rang. He was as much a part of our family as any other pet we owned. He was never a playful cat. When we noticed his not eating we took him to the vet and they did all sorts of blood tests and x-rays. The Vet noticed he had fluid or something between his liver and bladder. We went to Spearfish for an ultra sound. He had lost 3 pounds since he had seen his vet in 2 months. We noticed his backbone showed up much more when we pet him, but his tummy was always hanging down so we didn’t think much of it. The Vet in Spearfish could see on the ultrasound that the right side of his liver did not look quite right. It was more mottled than the left side. We decided NOT to do a liver biopsy as there was no guarantee that they could determine it was cancer. Instead, he needed food, so we chose to have the feeding tube put in. He had an antibiotic due to a bacteria in his urine, some kind of liver pill to be given once a day, and different food to feed him in the syringe four times a day. By the second day of feeding him he didn’t move and his stomach had increased in size. We made an appointment at the clinic so he wouldn’t suffer. He was still so bright-eyed as he was all his life, but we knew it was inevitable that he had no quality of life. He went over the rainbow at 10:04 a.m. on October 9, 2021. How I miss his meowing each night and morning when he would sit by the cupboard where we kept his treats. He would not quit meowing until you gave him his four treats. Then he did the same to Rick. I miss his howling in the morning at 4:30, waiting to be fed. I miss seeing him come into the sunroom to jump up on Rick’s lap when he heard the chair recliner come up when Rick sat down to rest. Otherwise, he never got on my lap. I miss his pawing at Rick when Rick would have some ice cream, knowing he (Mittens) was allowed to lick the bowl. Mittens was so independent and when he didn’t want to be petted anymore he left, or he would bite Rick. Yet, there were so many times I told him he was part dog. When we would sit at the table and eat dinner he would come up and put his paw on my leg and beg. Of course, cats don’t listen like dogs do (and sometimes they didn’t listen neither), and there was no telling him that he couldn’t be there at the table while we were eating. He was an exceptional cat. Cedric and Casey never liked him, but he never sharpened his claws on the furniture, he never caused any problem, or got into mischief. As it turned out, he lived with us close to 10 years. His only “friend” was Rick. Or should I say, he only liked to be with him.

Rick said we cannot have another pet because we are too old and they would outlive us. Who cares? Our kids would be more than happy to take our pet if we ever had another. I think pets bring so much love and companionship into our lives. They are fun, loving, make us laugh and smile, and how does one live without a pet, especially after 51 years? I just don’t know how I am going to do it. Yet Rick gets all uptight and upset when I mention getting another pet. I get it that it is hard to lose a pet and they cost money, but in the end, one has to think of all the love and happiness they have given us over the years. It is part of life. And…. Mittens was a big part of our life! 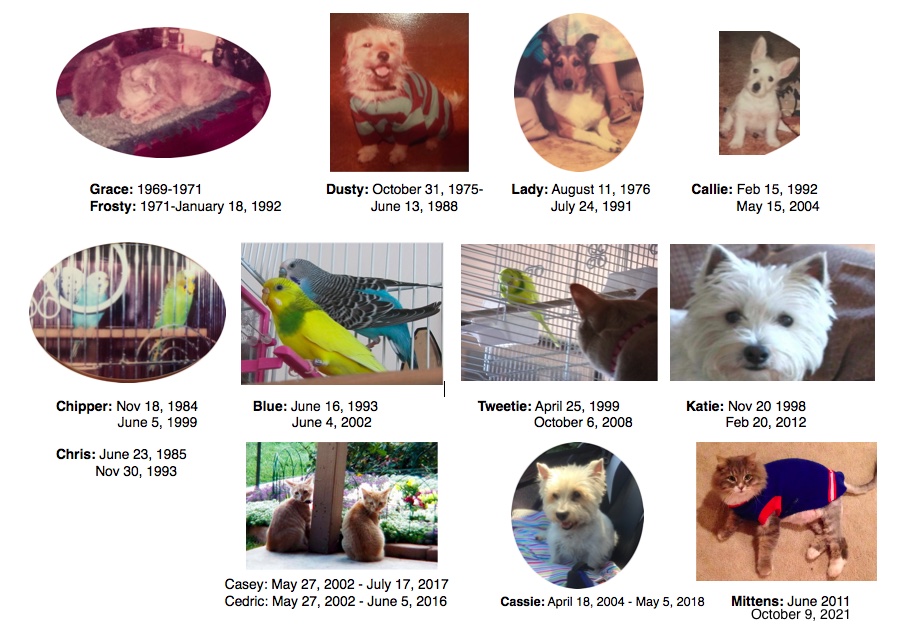